Warning! Red dye is not for kids...

My daughter, Dina had her 3rd (time flies!) birthday party over this past weekend, and I used a bit of red marzipan on her cake. I've never been a fan of fondant, (although I've not yet made my own, I've heard when you make it yourself, with choice ingredients it can actually be edible) and some might say, 'it looks amazing!' but I guess I'd rather use the phrase 'it looks like plastic!' to describe the fondant cakes I've seen. Never mind how bad it tastes- fondant looks like plastic and tastes like plastic, in my opinion.

Marzipan, on the other hand, is edible (almonds typically make up 20% of marzipan, the rest is mostly sugar) and can be made to look similar to fondant (smooth finish on top of a cake).  Marzipan shaped like animals, fruits and other tid-bits are commonly found seasonally in Europe. I prefer the French marzipan (the French are all about amazing food) over the German version but can't say I'd ever choose a marzipan pear over a chocolate bon-bon. I was intent on using red and white for the top of Dina's cake and it is always difficult to color red your own icing/frosting at home. Every time I try to dye frosting red it comes out orangey-red or dark pink- even using tons of the fancy red food coloring gel from Wilton. Also, if I add too much, my frosting separates. However, red pre-colored fondant or marzipan have a gorgeous color. How do they get it so red?  Not without something not-so-nice inside! 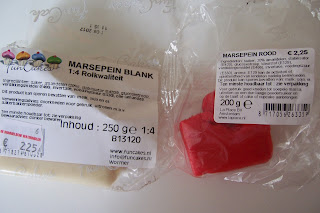 A translation from Dutch into English of the ingredient list for the red marzipan (Marsepein Rood) I got at V&D follows:
sugar, 20% almonds, stabilizer(Sorbitol- a sugar alcohol), glucose syrup, Allura Red AC, thickening agent Carboxy methyl cellulose, invertase(an enzyme that catalyzes the breakdown of sucrose), acidulant (Citric acid- to lower pH and to impart a tart, acid taste), aroma. This product can contain traces of milk, soy, egg. Allura Red AC can impact the activity and attention in children.

Yes, on the packaging it actually states, "Allura Red AC can impact the activity and attention in children."  My friend Marieke pointed this out to me when I told her I was using red marzipan (she noticed the same warning on the red fondant she used on her son's cake). Turns out that Denmark, Belgium, France, and Switzerland have all banned the substance. In the USA it is called, "Red 40" and is in many products including cotton candy, soft drinks, and children's medications.

Wikipedia explains that a study done in 2007 showed increased hyperactivity in children who ate Allura Red AC. The article goes on to recommend the following dyes be avoided by hyperactive children: Sunset Yellow, Carmoisine, Tartrazine, Ponceau 4R, Quinoline Yellow WS and Allura Red.  Since I live in the EU, I have to memorize a bunch of E-numbers rather than names as described above. Allura Red AC is E129. Here is the list of the rest:

I did end up using the red marzipan on her cake in small amounts, however, I suggested the children eat the cupcakes which I made with a simple buttercream.

Maybe I'm dating myself by admitting that I remember the red dye scare that happened when I was a child, because I remember that no red M&Ms existed until 1985. This was in spite of M&Ms not even containing the cancer-causing Red Dye No 2(E123)- which, incidentally, is still used in the UK for Glace cherries. I remember when red M&Ms first arrived during Christmas of 1985. It was so exciting to eat red M&Ms!

Of course this has me pondering about what alternatives exist for getting a gorgeous red color and yet not having a hyperactive toddler afterwards. Wikipedia also discusses the food coloring carmine (E120), which is derived from insects. Not without issue, carmine causes a severe allergic reaction in some people and also is not for vegans or kosher. It is banned in New Zealand as of 2009, presumably because of the allergic reactions.

Red Beets are another option, however the color is not such a bright red. Still, as a natural substance, you can't get more earthy than beets.
Posted by Meredith Graham at 10:33 AM