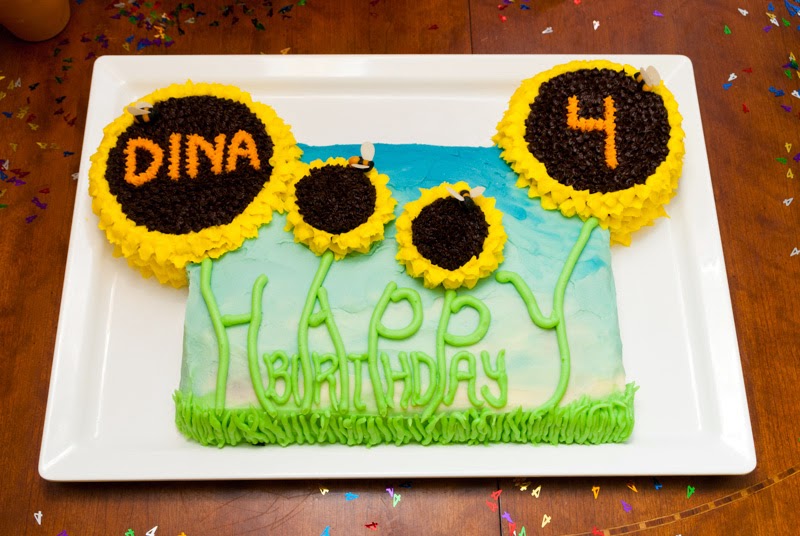 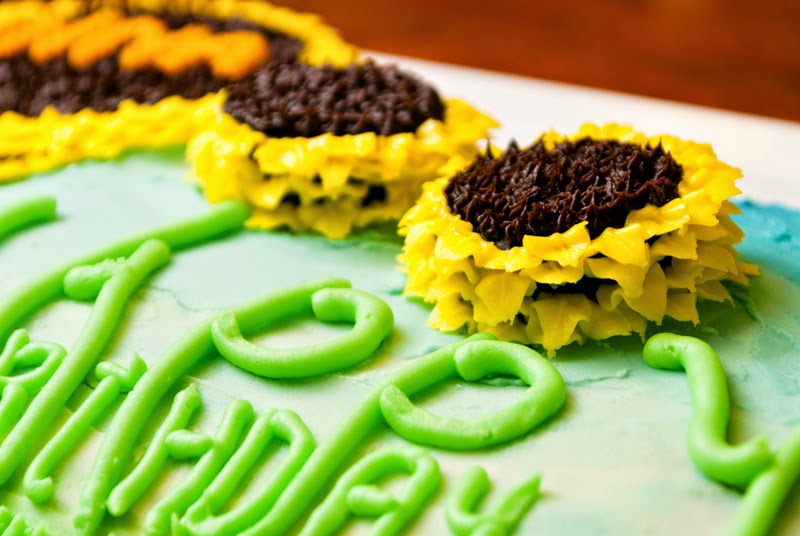 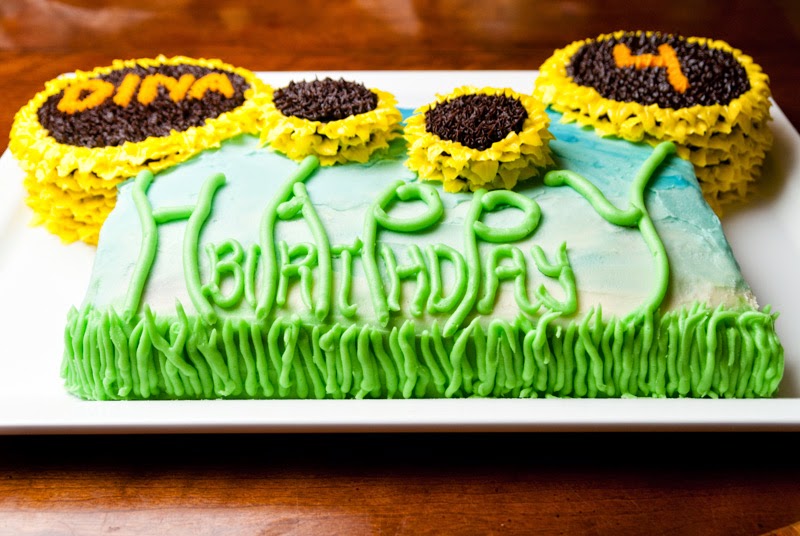 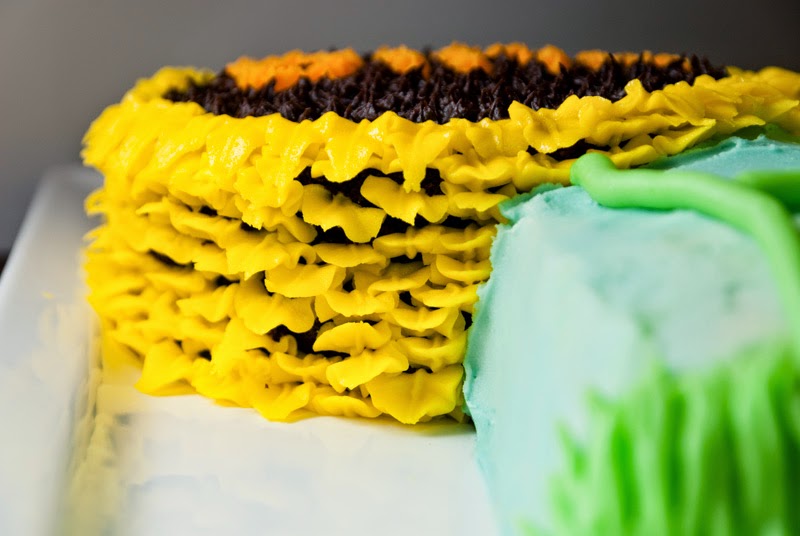 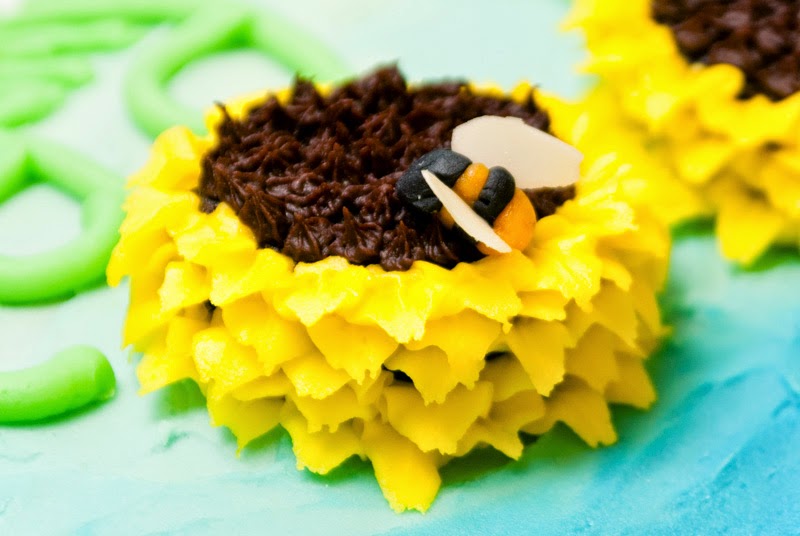 When my daughter born in March explained that she wanted to have a sunflower theme for her 4th birthday I was a little bit worried. Sunflowers? In March? Is that even possible here in NL? 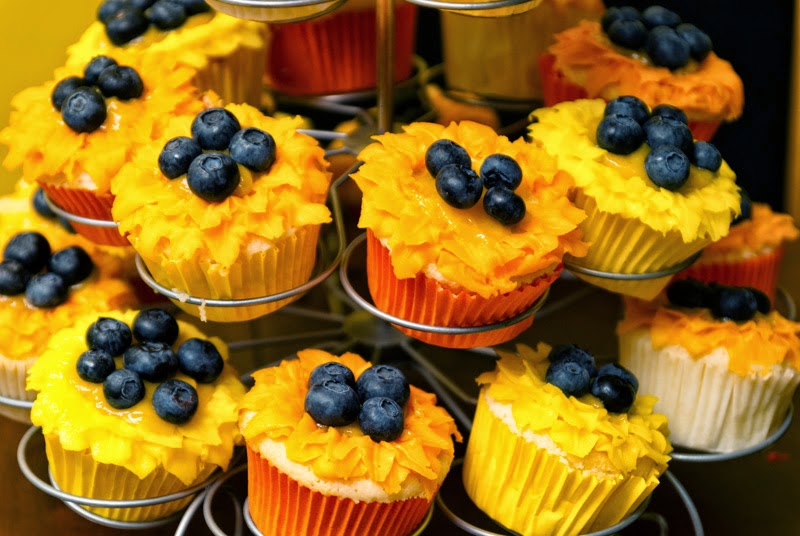 I immediately began planning the cake and even had her make a drawing of what she wanted her cake design to look like.


My decision to paint the wall to match the theme was perhaps a bit over the top, since I was 9 months pregnant at the time. 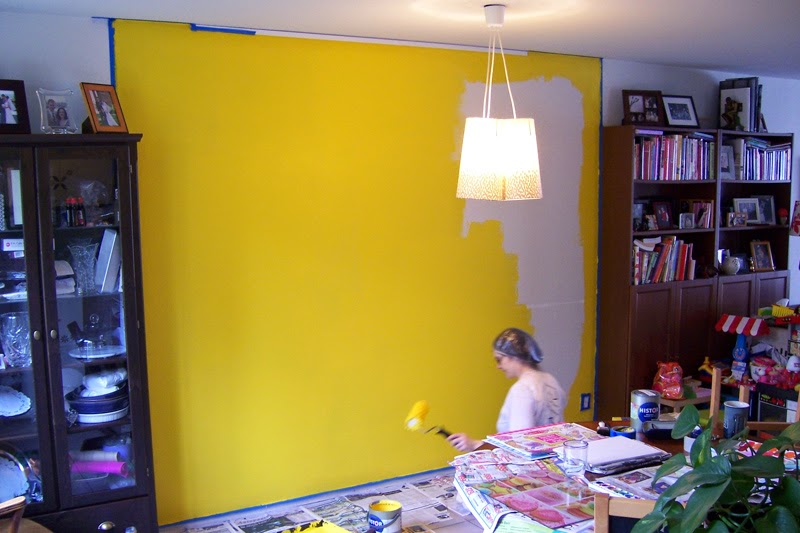 The color yellow we choose made me so happy, however, and I have not regretted it.

The luckiest part of the preparations happened a week before the party. I was at local outdoor market, getting flowers for a friend when I saw SUNFLOWERS for sale, totally out of season. I asked the guy where they were from, "Israel," he said, and his next question was, "Will you buy them? Great deal!" I asked if they would last a week and he suggested I place them in a cold place, in water, then cut them as short as I could manage just before the party. It worked beautifully. I was thrilled to have real sunflowers in March! 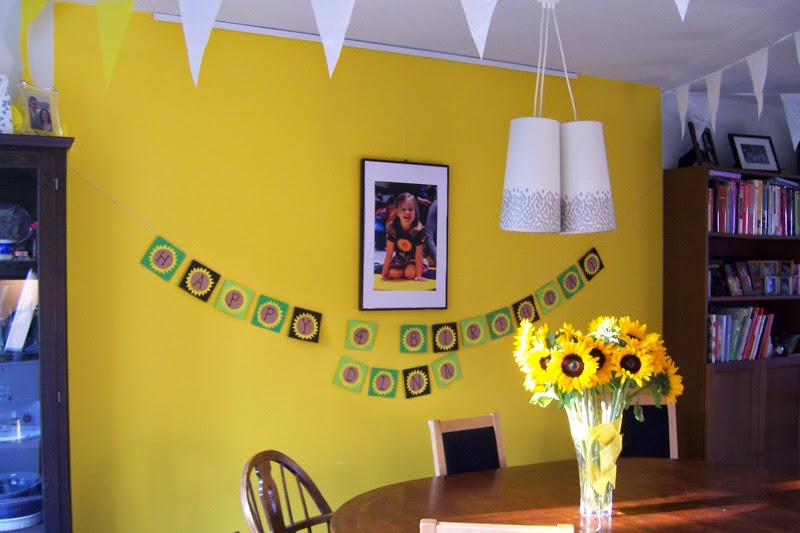 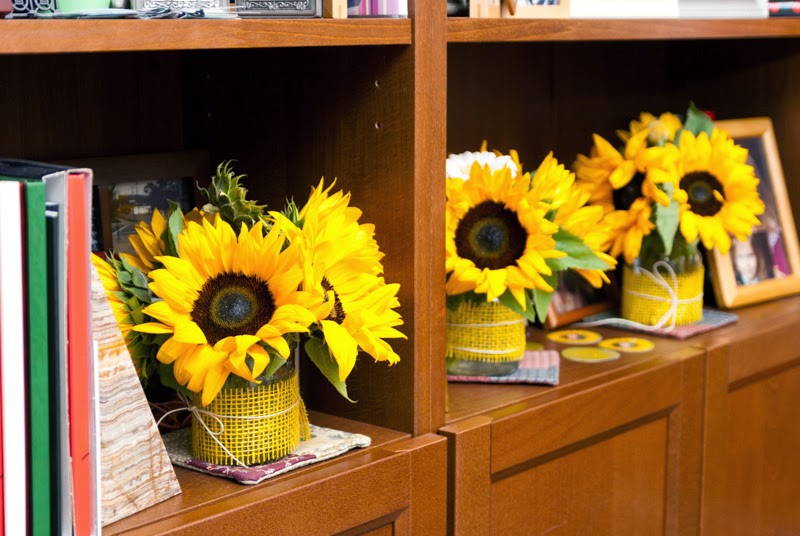 Using a 9x13" pan for the base cake and a couple of 6" pans and cupcakes for the flowers, I made her sunflower cake happen. 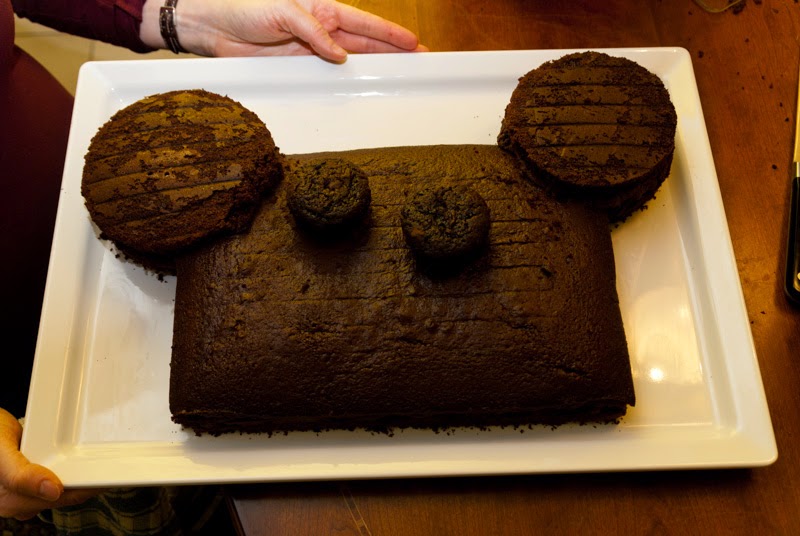 (Does it look a bit like Mickey Mouse here? I thought so.) 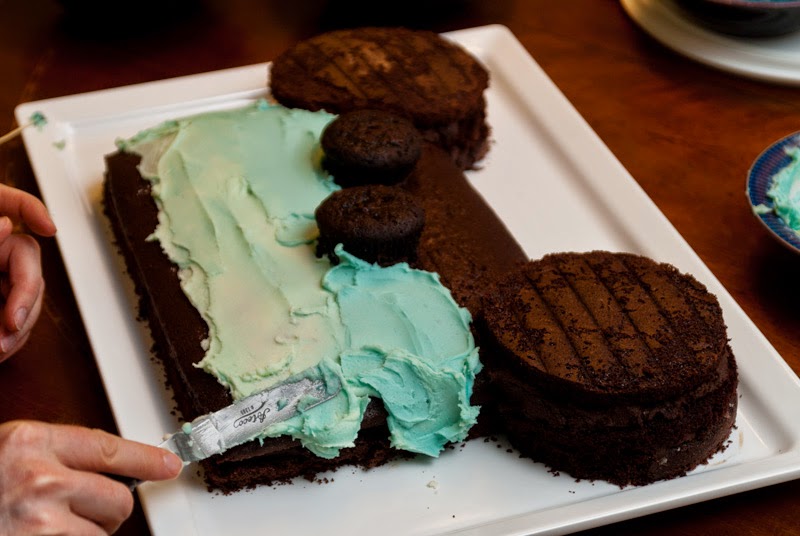 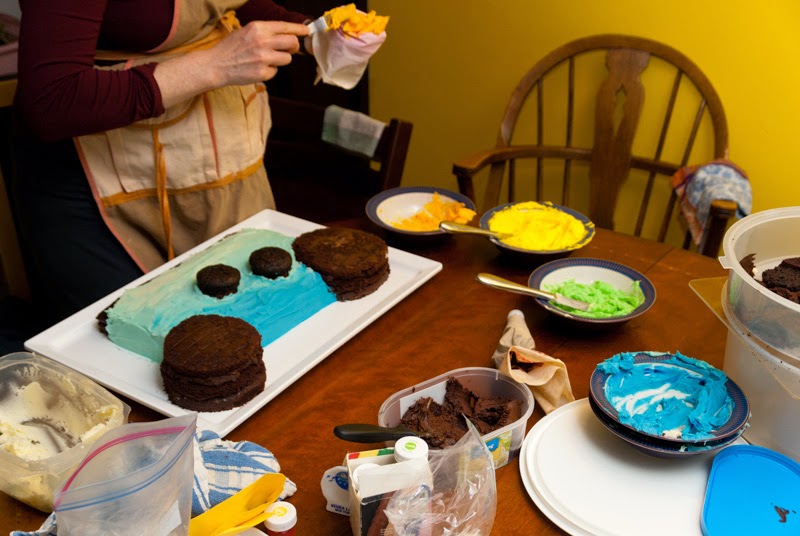 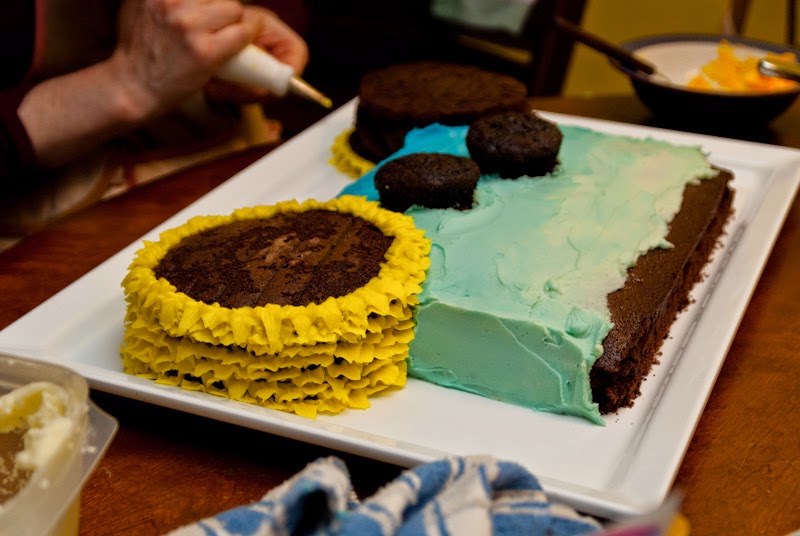 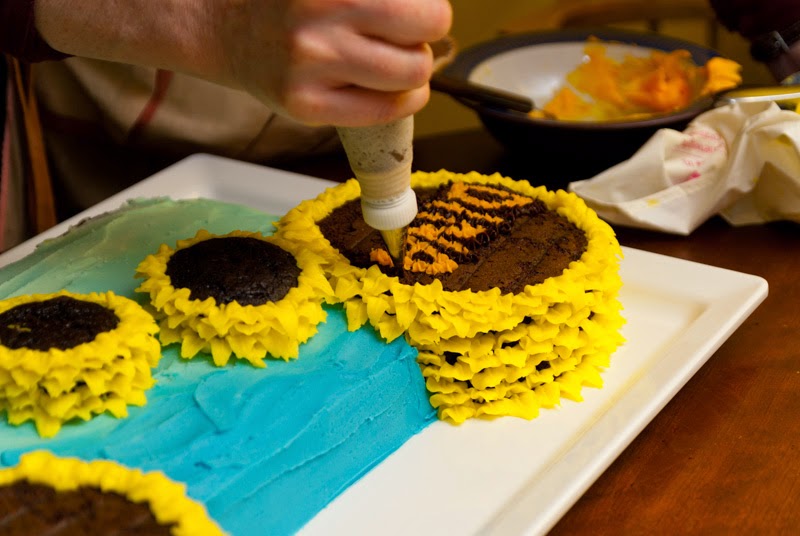 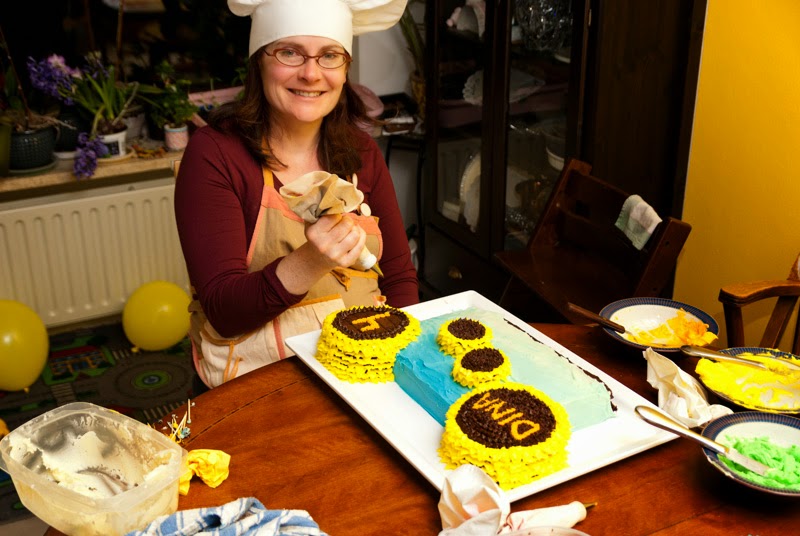 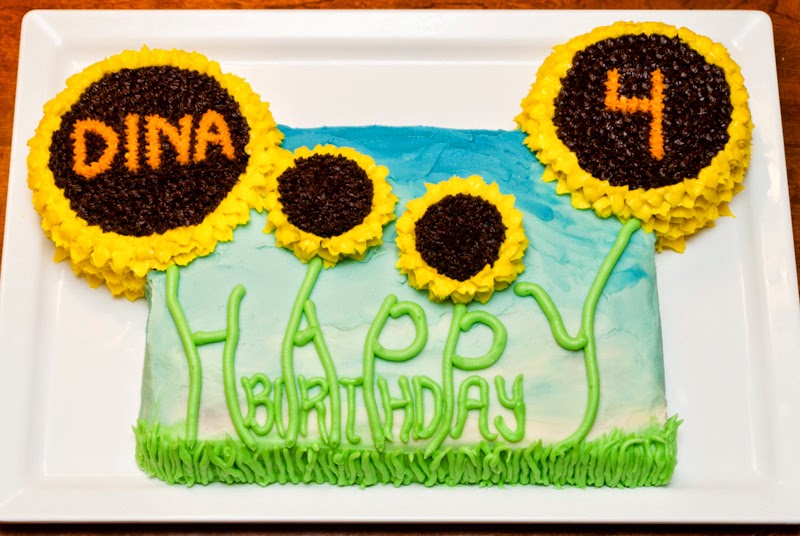 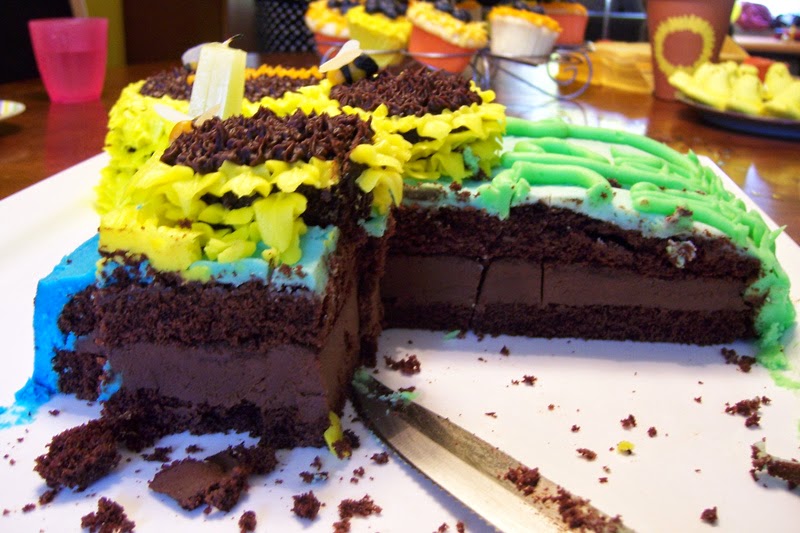 I made a chocolate cake with chocolate ganache filling, and basic butter cream frosting. The sunflowers were made with a leaf tip (#68) and a star tip for the top, using a cocoa frosting. The grass and the writing were made with a round tip (#10 and #7). I did not put a base coat on the sunflowers, so you see the chocolate cake through the yellow petals, which I felt made it look more true to life.
The favors were sunflowers, grown from seed in the months before her birthday. I had her take a similar favor to school to give out but in that case it was just seeds, dirt, and a tiny painted pot with a stick holding the center of the invitation design(thanks, Uncle Danny!) and "Dina is 4" on the back. 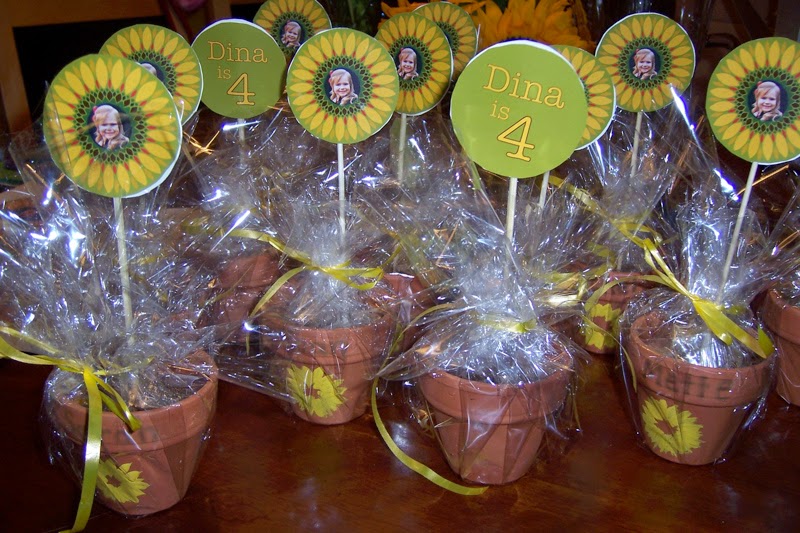 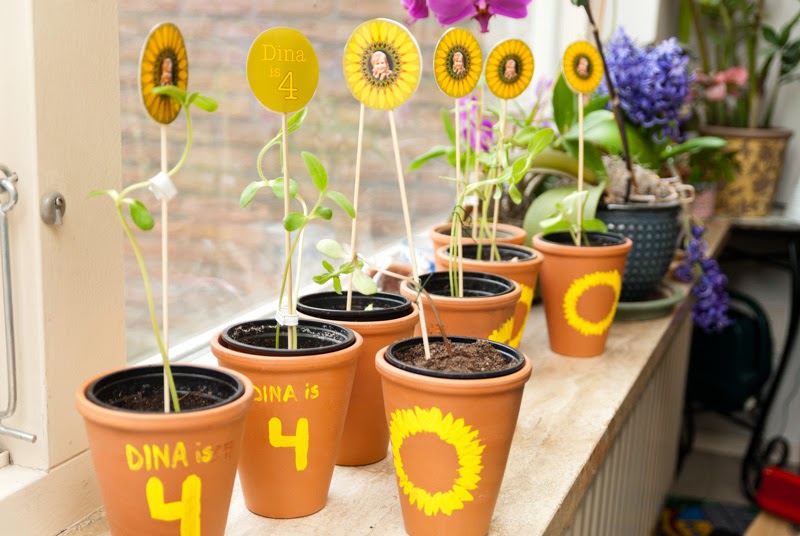 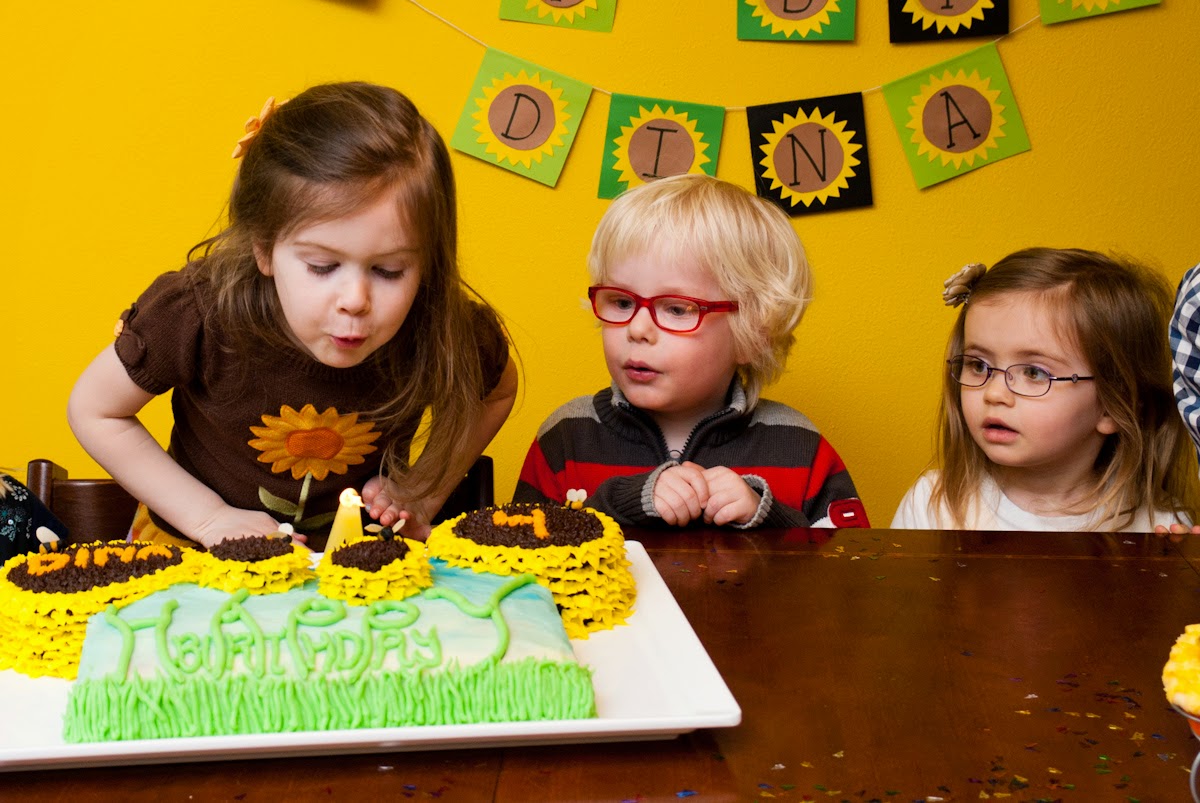 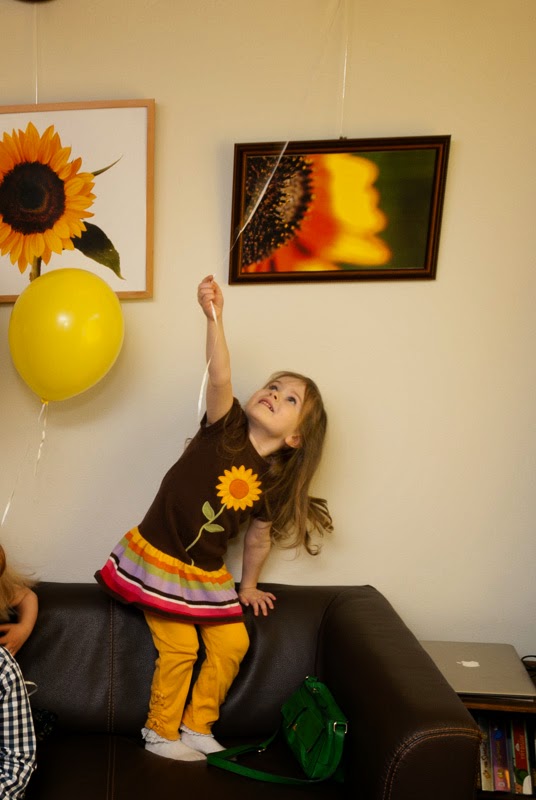 We also covered our normal framed photos with my photographer husband's best sunflower ones. 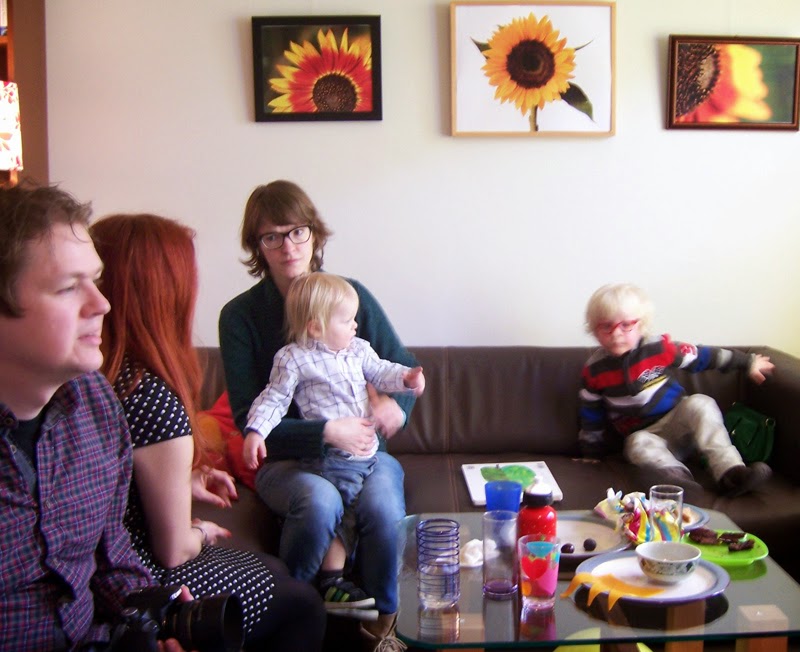 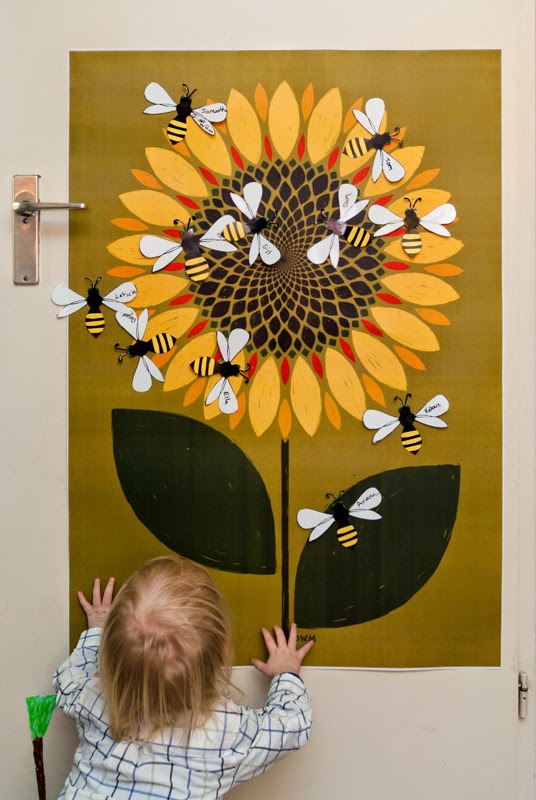 We played pin the bee on the sunflower. Thanks, Uncle Danny for the giant sunflower, and Thanks, Samantha for the bees! 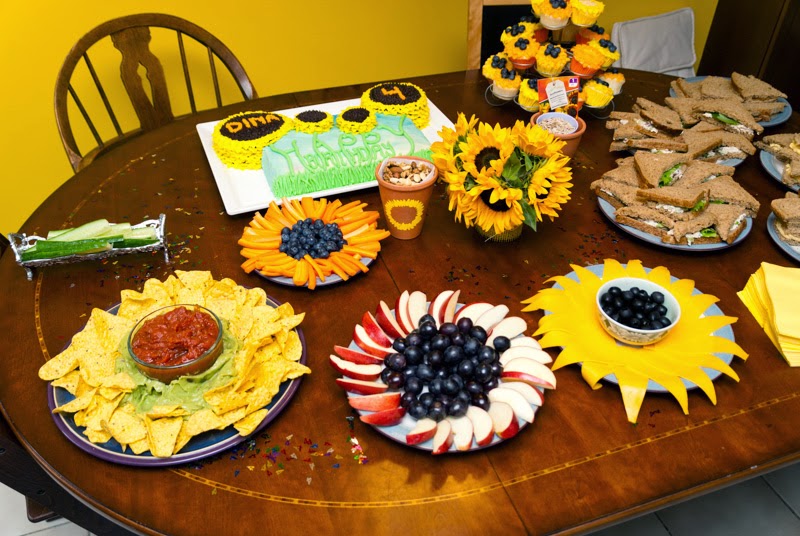 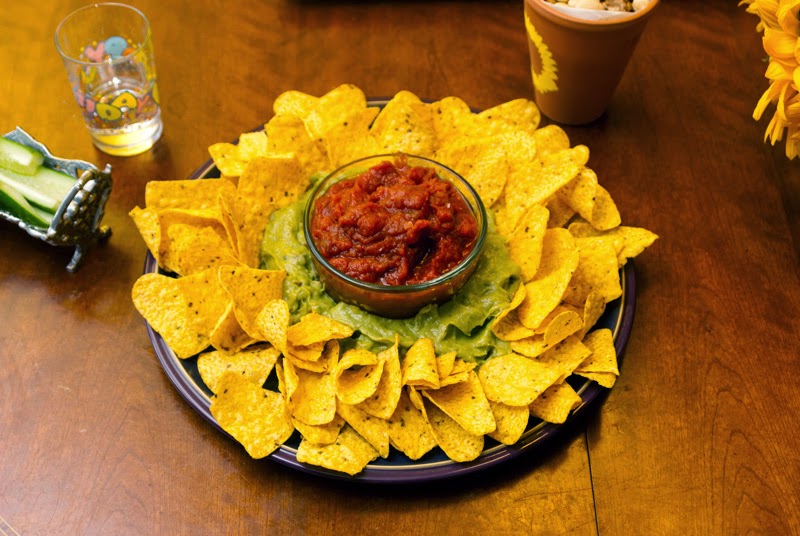 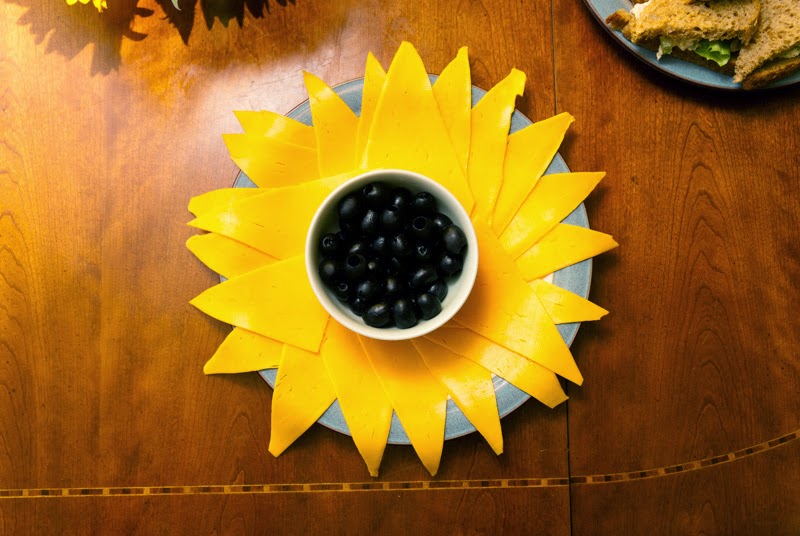 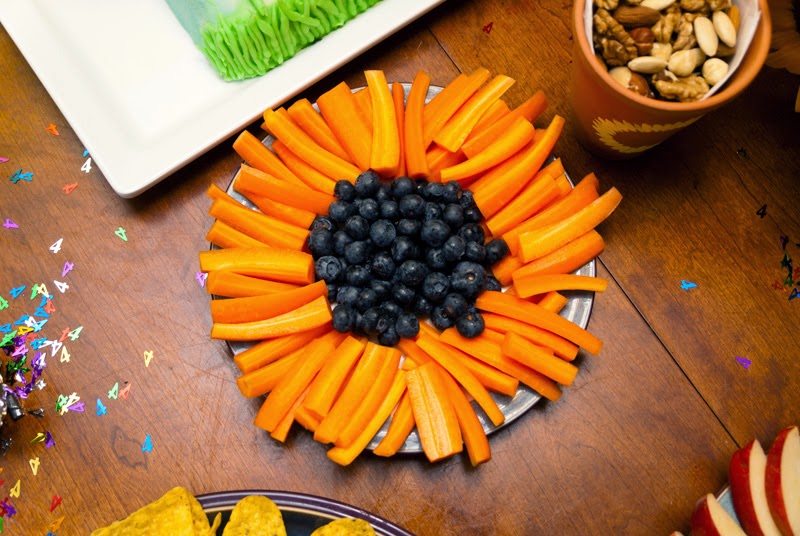 For her school party I made cupcakes- using Oreos as the center of each sunflower and also using round chocolate crunchy sprinkle-type things as well. 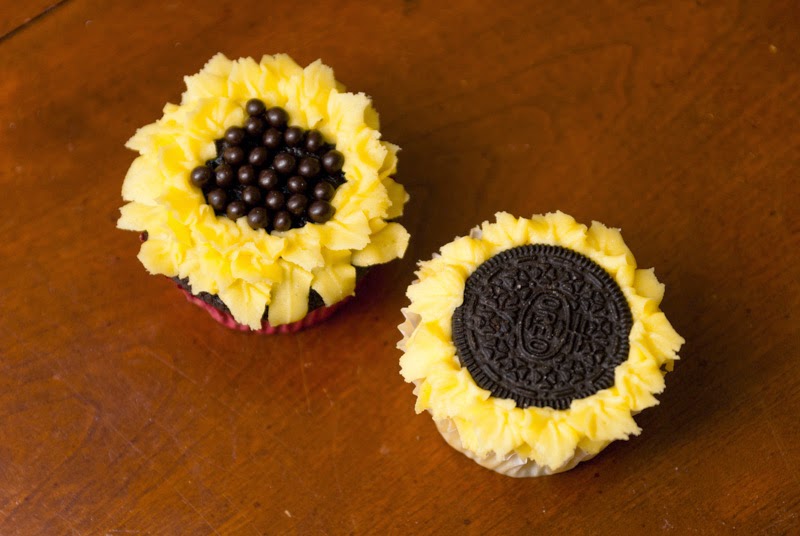 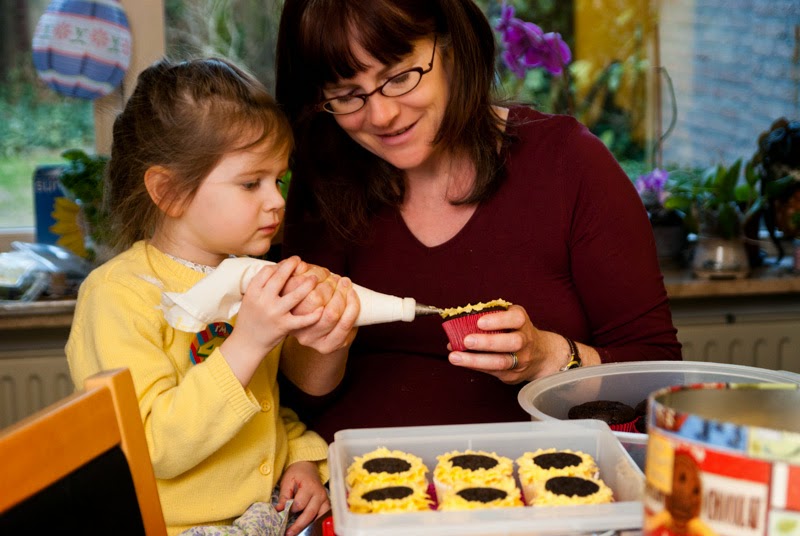 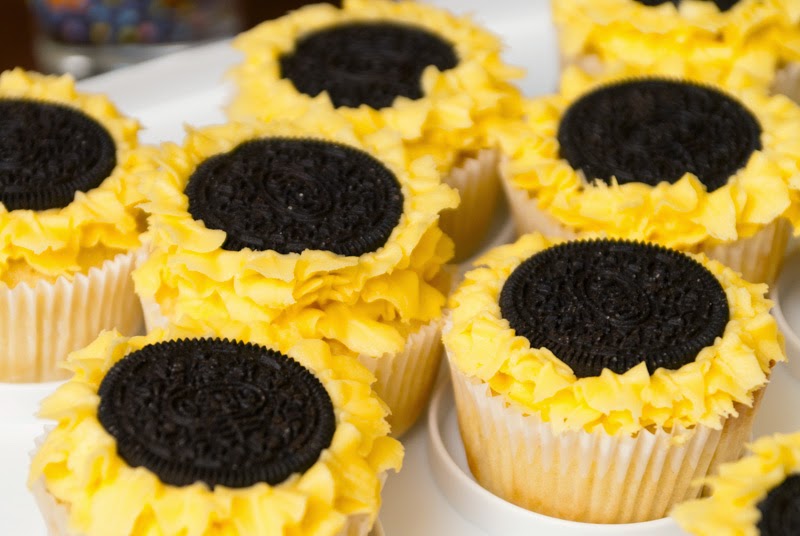 It was a great party and we enjoyed celebrating Dina's fourth birthday! I'm over a year delayed in posting about this- but it was a blast.
Posted by Meredith Graham at 10:53 PM