Chocolate and where to find it

Every time we visited Europe before we moved here we would hit a chocolate shop or two. Or ten. We'd been to chocolate shops in Switzerland, France, Germany, and Italy. By far my favorite memories are of chocolate from Switzerland (Heine in Luzern) or France. Don't get me wrong, Parkleigh (mere steps from where I used to live in Rochester, NY) had some very tasty bon-bons from Ghiradelli in California. It is also tough to refuse a truffle from Godiva. However, my favorite American chocolate used to be Scharffen Berger or Valrhona and when I lived in the USA I used to seek out Callebaut, which is made in Belgium.

So, just imagine my anticipation of actually living in Europe, steps away from European chocolate shops. My mouth watered the entire plane ride over. When we spotted our first glimpse of one, in downtown Eindhoven, we bolted to buy a nice assortment of bon-bons. As I tasted them, one after the other, I couldn't help but feel strange. These weren't what I was expecting. Wait a minute, I said, we are 20 minutes drive from Belgium now! The chocolate here should blow me away! We tried another shop in the Netherlands. And another. And another... I'm not saying that any of these chocolates tasted bad, of course. I'm just saying that they are maybe a step down from Ghiradelli or Godiva. Of course they are better than Bakers chocolate, or a Hershey bar. But I was puzzled. Where was the Callebaut at every street corner?

It turns out that the Dutch have very different preferences for chocolate than the French, for example. If you bring bon-bons from the Netherlands back to the US, people will say they are good. So it isn't you, its me. I must just have taste buds that are more like French people.

Twenty minutes away from Belgium and where is the Callebaut? At the watermill, of course! Genneper Park watermolen, located in Eindhoven, sells chocolate chips made from Callebaut chocolate. SCORE! 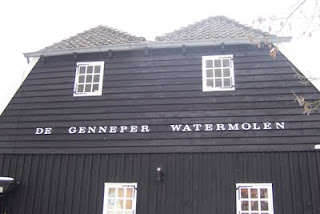 Here are some other tidbits I found there: 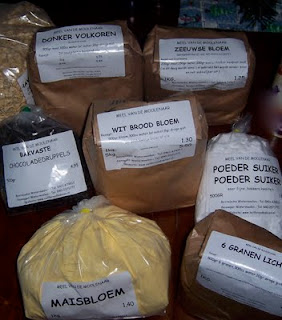 Chocolate chips are called "chocoladedruppels". A 500g bag of the Callebaut ones is 5.95 euros. They come in normal size and also mini chip size. I get my flour for cookies and cakes here and it is called zeeuwse bloem. Most similar to an all-purpose flour in the USA, zeeuwse bloem has been great in a country dominated by bread flour. The poeder suiker (powdered sugar) they sell there is similar to Domino's in the USA, perfect for icing and frostings. Do not buy the poeder suiker from AH for anything other than a brief sprinkle on pancakes. It is too grainy for frosting.

Don't worry, I got my chocolate fix: in Switzerland at the Cailler factory in Broc. 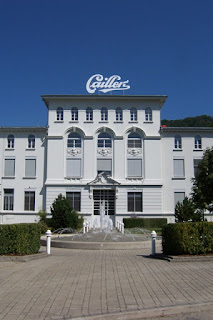 The chocolate there completely blew me away. It was difficult to select which chocolate treats to buy because they all tasted good. Oh yes, they had a tasting room.... unsupervised.... and it was not a dream. I have pictures to prove it. 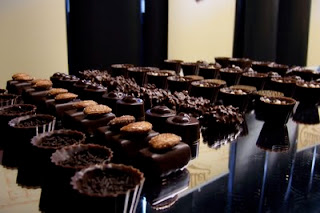 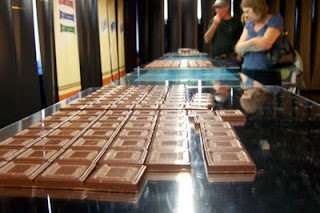 We brought home as much as my husband would allow me... 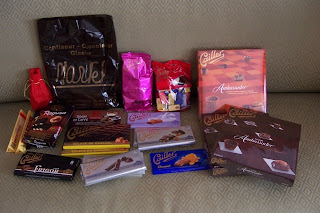 ...and it was gone in less than a week. Guess we'll have to go back!
Posted by Meredith Graham at 3:41 PM No comments:

In the Netherlands, as in France, and I'm guessing other EU countries, baking powder is easy to find in your local grocery store. The Dutch call it 'bakpoeder' and it comes in little packets. Unfortunately, it usually contains aluminum, which has some controversy regarding consumption. You can get aluminum-free baking powder at the reform winkles (health food stores) in the Netherlands, or you can import it from the US or head to Paris to Le Bon Marche grocery store and stock up on my personal favorite: Rumford Baking Powder. Yes, I will use any excuse to head to Paris.

But let's talk about baking soda for a moment. When I need good old Arm&Hammer I head to any Chinese grocery store, and I can always find a bright orange box. I recently discovered that it is also sold at the apotheek (pharmacy) here in the Netherlands. The name is Zuiverings-zout and as you can see below, the contents is 100% Natrium bicarbonaat, which is exactly the same as the ingredients on the A&H Box. Thanks to Karen for the zuiverings-zout! We miss you here! 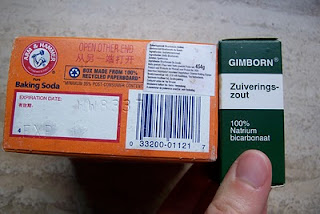 Explaining to your Dutch friends that this particular product is different from baking powder isn't easy, and I made a mistake once of mentioning that baking soda can also be used to clean things. Right. Just imagine the reaction: You EAT something and use it to CLEAN with, too? And the most common response when I say I need it for recipes: "But you have baking powder, so why?"

If you currently live or have lived in the Netherlands you will know about Albert Heijn. AH is a grocery store that you can find just about everywhere here. The size of the store depends based on location- tiny "AH To Go" at train stations and medium sized stores in smaller neighborhoods. For a real treat check out the AH-XL, as the name implies, it is huge. Strangely, it does not have much more selection than our AH in Aalst, however, just bigger aisles and a few things that might make a trip there worth it if I'm in the neighborhood. For those Rochester folk reading this... think of a standard Wegmans but maybe half as much selection. AH tries to be the grocery store with friendly, helpful staff, but I have to say employees are mostly ignorant of the store's products or locations of products. Even if I know the Dutch word for something and I show it to them written down (more on that later) they have to ask someone else. Not like Wegmans employees who always know where something is and will race a fellow employee to tell you the answer faster (and want to show you too, if you like). Not to say the AH employees aren't nice. But unless you are looking for something like milk or bread or standard Dutch cheese they have no idea what you're talking about.

The Dutch love their Gouda cheese. And it isn't like the Gouda I remember buying at Wegmans occasionally for a recipe- no- this stuff is actually quite good on its own and in a sandwich and grated in a taco. It is quite versatile, thank goodness, because it is just about all they have here. My Dutch friends would argue there is a wide selection of cheese- you have "Oud" (old), "Belegen" (medium), "Jong" (young) and all the combinations in between. Also, several brands are available in each of those options, and you can also buy sliced or grated or just a big chunk of cheese. 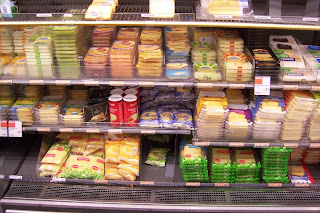 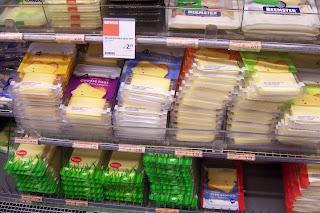 I love the packets of sliced AH brand Jong-Belegen for sandwiches or melted on a fried egg. If you want 'fresher' cheese you can hit the market or the other cheese section of AH: 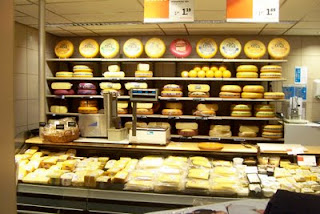 Look at all this cheese! (it's almost all gouda) 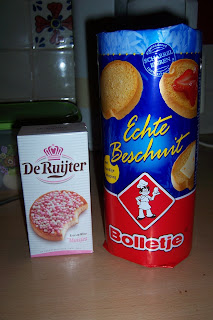 Lest you be confused upon shopping at AH, I'll explain. For convenience sake there is a cheese section with all the pre-packaged cheese and one more like a deli-counter. Wegmans does a similar thing. However, I bet you would never have guessed there are two cracker sections at AH. One has crackers and things like these: "Echte Beschuit" (Think of a circular piece of bread, toasted, preserved, and packaged up in a tube- similar in texture to melba toast.) These beschuit are eaten with butter and "muisjes" (pictured sitting to the left of the beschuit) which are anise seeds covered in a candy shell in either pink and white or blue and white. They are served to guests when a new baby is born in the Netherlands and the muisjes are said to help increase milk supply for breastfeeding mothers.  I enjoy the muisjes and put them on toast or on sugar frosted cookies. The beschuit, on the other hand, along with melba toast, is best used in my opinion as a hockey puck.

The other section that has crackers at AH is near the wine. Because you have crackers with wine, of course! And the sugar and brown sugar are located in the coffee aisle. Because sugar is used with coffee or tea, since not many people bake here. 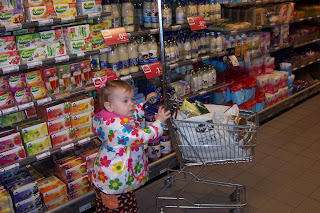 Here is Dina, with her pint-sized shopping cart (love this feature at AH!) in the tea/coffee aisle. Note the sugar next to the coffee creamers.

One other thing amazes me about AH: the candy aisle. It is insane! 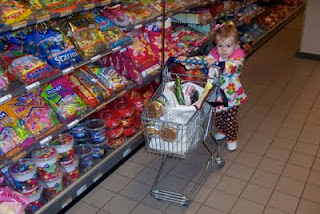 We buy the licorice that looks like spirals. It is considered 'zacht and zoet' which means soft and sweet. Licorice, or 'drop' comes in so many different varieties. Soft, hard, sweet, salty- and any combination of these. Its tricky because salt is 'zout' - just one letter different than sweet.  And the Haribo gummy bears- you just can't beat them. Unfortunately, Dina likes to eat them without chewing- she can down a handful in less than a minute.

Posted by Meredith Graham at 4:25 PM No comments:

When Dina was a couple of months old I took her to the 'Consultatiebureau' which is Dutch for 'place to take your kid for wellness-visits and immunizations'. On this particular visit I met Viktorija and her baby, Leticia.  I feel lucky to call Viktorija my friend. She and her family are from Croatia and so have very interesting recipes to share with me! One of her most favorite desserts is something like a 'berrymisu' which reminds me of tiramisu but with berries instead of coffee. It is best made the day before you want to serve it, as the flavors blend together beautifully in the fridge overnight. If you don't have the exact measurements for this recipe, or you have something similar, do not worry. Viktorija would say, "Make it how you want! Use what you have!" and my favorite, "Relax!" 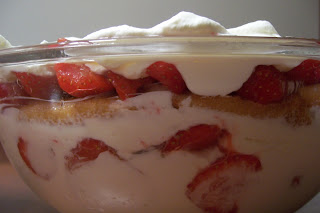 Beat cream on high speed until stiff peaks form. If desired add a bit of powdered sugar (I prefer it without sugar). In another bowl, beat marscapone cheese until smooth. Fold in the whipped cream, but don't stress if it is lumpy.

Next, bring water and sugar to a boil in a saucepan. Once it is boiling, take it off the heat, transfer to a dish to cool and add lemon juice and vanilla. If you don't have vanilla you can add some other liquor or orange flower water.

Using a large glass bowl or other container, dip each egg-cookie or ladyfinger into the sugar/water/lemon mixture and line the bottom. Spoon the cream/marscapone mixture in a layer and then add sliced berries. Repeat this with more dipped cookies, cream and berries until you have filled your container or run out of ingredients, whichever happens first. The best way to end this layering is with a layer of cream on the top and maybe a few strategically placed berries for garnish. You can also garnish with a sprig of mint.

Chill for at least an hour and preferably overnight. Serve in glasses for an elegant effect!

If you don't have Marscapone cheese, Philadelphia cream cheese is a good substitution. 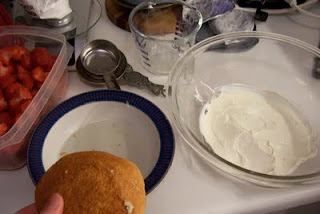 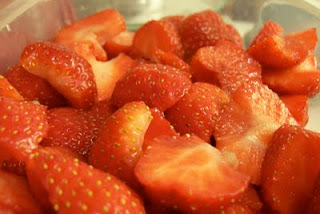 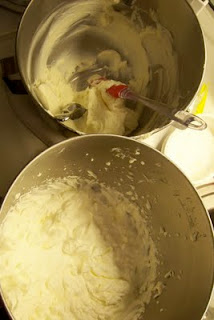 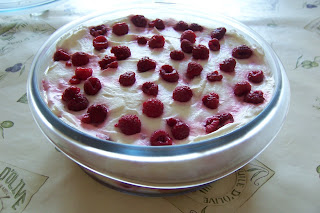 This photo is of the first time I had this dessert, at Viktorija's house. Notice the beautiful arrangement of raspberries she added to the top. Most of the time I'm in a rush and forget to garnish this fabulous dessert. But this photo reminded me of how pretty it can look!
Posted by Meredith Graham at 5:01 PM 1 comment: