Where oh where is the cereal here?

We've been in the Netherlands for 3 (!) years now and so I've had to make-do with products I find here (for the most part... I will admit to some addictions to things like Tom's of Maine toothpaste and still being unable to find unscented deodorant here.) In the Netherlands, there are very few choices of cereal. Seventeen varieties of Special K and a few others is about it. One of the cereals I miss most is Raisin Bran Crunch. It has just the right amount of crunchy-ness, a generous helping of raisins, and even decent bran content. Since the airlines implemented the recent fee increase for the second checked bag (well, at one point, long ago, you could take two bags on an international flight for no charge. Then it was $50 for the second bag. Now it is $70 or more, depending on the airline... argh), it makes more sense to try to create my favorite things here rather than import them.  For Raisin Bran Crunch, here is my 'recipe':
Pour Bran Flakes into bowl about 1/2 full. Add Special "K" and Frosties(equivalent to Frosted Flakes in the USA), in equal portions to make up the other half. Sprinkle bits of muesli and tons of raisins. Voila! You have a close approximation of Raisin Bran Crunch! And it only took you 5 products in the Netherlands! 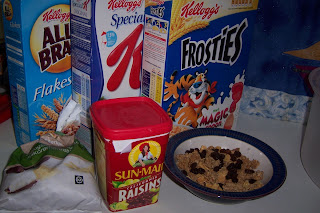 It sounds ridiculous, but I miss cereal so much. I probably should not admit this online, but when we drive to Belgium and hit Carrefour I stock up on things like Golden Grahams, *almost like honey nut* Nestle Cheerios, and other sugar cereals. I know I shouldn't, but when I see things I can't get here in the Netherlands, it is a total impulse buy. On a related note, when we are in the USA and near a Dunkin Donuts, we have to stop and indulge. When we lived in the USA we rarely went to Dunkin Donuts! But now that we can't get it, we crave it! 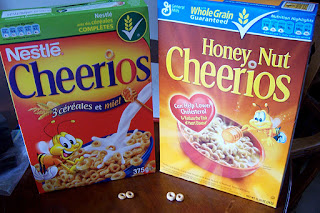 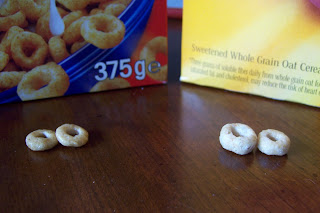 Speaking of cereal, I'd like to end this post with a review of Cheerios-like cereals. Above, you see my favorite, Honey Nut Cheerios(imported) with the closest approximation here in my grocery-shopping area of Europe (Netherlands, Belgium, France, Germany), Nestle Cheerios. If you look closely, you can actually see the coating of sugar on the Nestle Cheerios, which makes sense since they are quite crunchy. The HN Cheerios even seem to have more holes (air pockets?) which makes them less crunchy and results in a lovely 'pop' in your mouth. Don't get me started about the Dutch version of Cheerios, called "Loops". 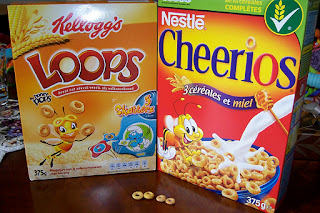 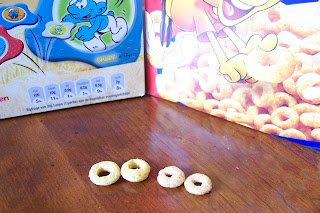 The only way to describe Loops is that they are rocks masquerading as food. If I thought the Nestle Cheerios were 'crunchy' then the Loops are 'tooth-breakers'. Additionally, it is impossible to find cereal for kids here that has a low sugar level like regular Cheerios. When my daughter was little, I imported regular Cheerios with regularity because I just couldn't imagine a 12 month old not eating Cheerios! Unfortunately, now that she is two years old, she finally noticed the difference between my Nestle Cheerios and the low-sugar imported from the USA ones she was eating and now asks for "Belgian cereal". It totally cracks me up when I hear her say that.
Posted by Meredith Graham at 7:39 PM