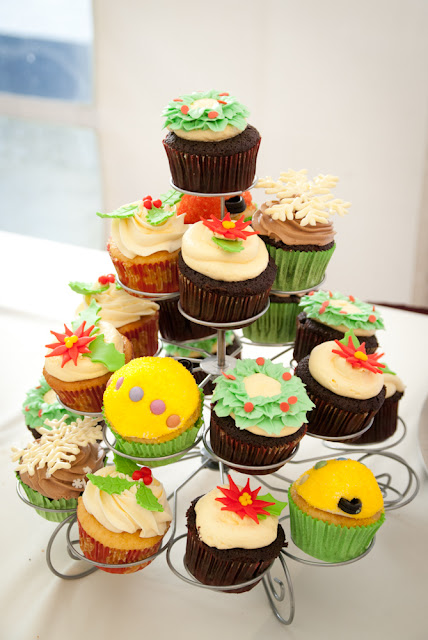 A few of us (on the Mums and Toddlers group I'm on the committee for) decided it would be fun or interesting (or basically way better than the ridiculous dessert normally served) to bring cupcakes to our annual Christmas party. The party had about 40 adults who had rsvp'd, along with about 40 kids so we decided about 8 dozen cupcakes would work. Rachael and I each made 4 dozen cupcakes of varying Christmas related designs.  I'd love to say it was easy and great fun, but in reality it took a lot of time (although the design making was great fun) and I learned about how I have a propensity to over-do it. Why was this a surprise, you ask? Ha. The good bit was that I finally made buttercream. REAL buttercream- the kind which involves eggs being cooked (but not too much) and dissolving sugar in water and boiling it to a specific temperature and streaming said sugar/water into the eggs... so complicated and yet so luscious!! 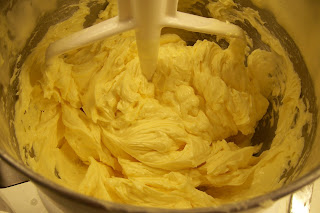 The main reason I've hesitated on making buttercream this way is that my old standard of butter, powdered sugar and a bit of milk is really good, and works well to decorate a cake, cookies, or just spoon out of the bowl. It is quite sweet, however. Plus, I'd been watching the CIA's DVD Cake Decorating and the description of making Swiss buttercream really sounded almost easy. It was time to bite the bullet and try it. So, one night last week, I tried making the Swiss buttercream. And I had success! Once I did that, the world was my oyster. I'm not one to pre-judge a recipe, and in the CIA's Baking and Pastry book there are FOUR buttercream options, so I decided to try three of them. I also made the Italian (very similar to the Swiss) and the French (much different because it included egg yolks). And it only took me an entire evening, until 1:00am in the morning. 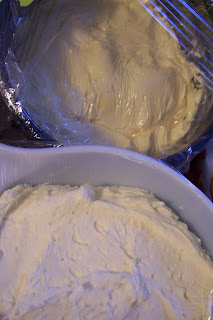 Then, naturally, we had a scientific taste test which meant my husband had to sample all these buttercreams. It was clear to both of us that the French buttercream had something amazing about it. The Swiss and the Italian both were outstanding, waaaaay better than the average standard buttercream... but the French. Ahhh the French! They really know how to blow you away with food, don't they!? It was almost like slightly melted ice cream but not cold. Other thoughts: smooth, airy, rich, fluffy, creamy, buttery, complex. 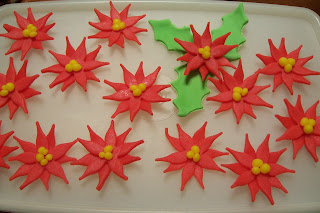 For days(four days, actually!) I made little toppers for the cupcakes, using white chocolate, red pre-colored marzipan, (and I meant to buy marzipan but accidentally ended up with green fondant- argh!), and white marzipan.  I piped, rolled, cut, and shaped poinsettias, candy canes, snowflakes, and holly. 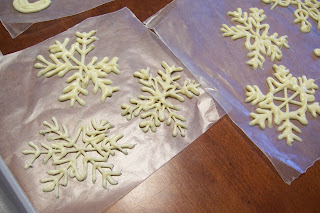 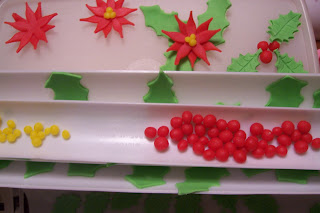 It is handy to be able to do these sorts of things ahead of time, but of course then it becomes a situation where you spend as much time as you have (and that can be a lot if you aren't careful!). But I do love making the decorations! For the flowers and leaves, I dried the marzipan or fondant pieces on a curved surface, so they would have a bit of realism to them. 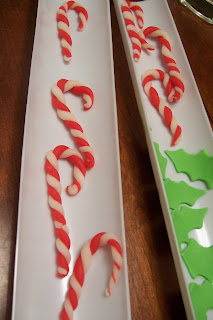 The day before the party, I baked the cupcakes. First, I made chocolate cupcakes using The Whimsical Bake House cookbook's Chocolate Butter cake recipe. Next, I used my good old standby,  CIA's Baking At Home classic white cake recipe to make vanilla cupcakes, which turned out to be a COMPLETE DISASTER. 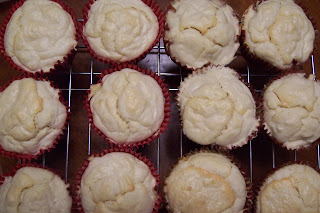 I made biscuits. Not cupcakes. They looked terrible. Just look at them! Horrific, no? Who wants to eat that shit? I was mortified. My helpful husband said, "Frost 'em up! No-one will notice!" But I couldn't do it. Instead, I hunted in the cabinet for my panic box. The Pillsbury Yellow Cake mix box, that is. It was a cop-out but also a sanity check. Since I still had to frost and decorate these puppies, I decided that Pillsbury was better than biscuits. 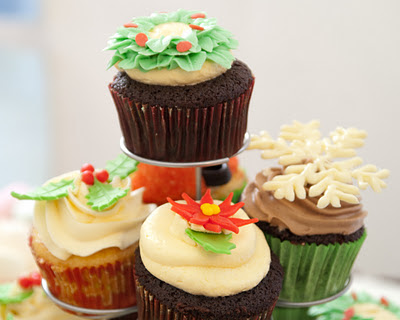 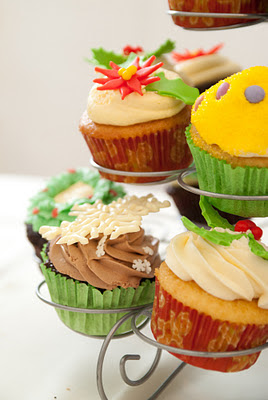 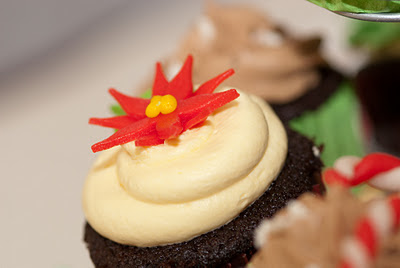 Overall, I'd say it was a success. Would I do it again? Maybe...
The best part of all was watching my kid eat a cupcake. Her smile can melt butter. She choose the vanilla cupcake with a buttercream wreath and then proceeded to only eat the frosting. Smart girl.

For those thinking they might give a real buttercream a go, here is the (relatively easy) CIA's Swiss buttercream recipe (with my notes):

1. In a stainless steel bowl set over simmering water, put the sugar and egg whites and whisk to combine. Heat, whisking constantly, until mixture measures at least 140 degrees F and not hotter than 165 degrees F. If you are worried about salmonella, you should make sure you hit 160 degrees F (70 degrees C).

2. Transfer the bowl to your mixer and whip the mixture with a wire-whisk attachment for about 5 to 10 minutes, or until the mixture is shiny. Touch the bowl to see if it is room temperature. (There is no risk of over-whipping here, so do not worry about that, just keep whipping)

3. If your bowl feels like room temperature, you are now ready to add the butter. Change your attachment to the paddle attachment and gradually add the butter, a small piece at a time while whipping at medium speed. The buttercream should look light and creamy. If it does not, your butter was too cold and you'll need to put your bowl over the pan of simmering water again and 'melt' it a bit to heat it up. Do not melt more than 5-10% of your mixture. The edges of your mixture should look a bit like ice-cream as it melts, and you should put it back on the mixer and see if it whips up nice before melting more of it if needed.

5. You can use the buttercream now, or cover the buttercream with plastic wrap and store it in the fridge at this point for up to 1 week. To 'reconstitute' it, leave it out at room temperature for several hours, or, do the melt it over a pan of simmering water routine and then whip it with a paddle attachment until it looks smooth and creamy. You can also freeze it for up to a couple of months.

6. Load it into a piping bag with a star tip, or a plain round tip and pipe it onto your cake or cupcakes. Enjoy!
Posted by Meredith Graham at 4:34 PM